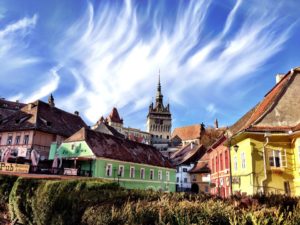 Sighișoara is a city in Mureș county, with a population of approximately 28,000 inhabitants. The historical center is extremely popular among tourists, being present on the list of historical monuments of the county and in UNESCO World Heritage.

The medieval fortress of Sighișoara now has three bastions and nine towers. The most representative of them is the Clock Tower (the Tower of Hours).

By tradition, the following events take place every year: